Pope Francis issues “Fratelli Tutti” we are Brothers and Sisters. 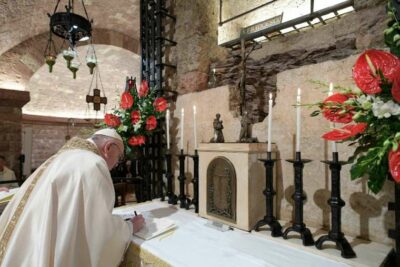 Pope Francis has issued a new Encyclical letter Fratelli Tutti that focuses on fraternal relationship for all, men and women are brothers and sisters.

The Pope’s Encyclical was signed on Saturday, October 3, before the tomb of St Francis of Assisi, on the anniversary of the Saints death.

According to the Pontiff, the encyclical has been inspired by St. Francis of Assisi whom he describes as the “saint of fraternal love.

He said St. Francis of Assisi a saint of fraternal love, simplicity and joy, who inspired him to write his second Encyclical Laudato Si’ the mother earth five years ago prompted him once again to devote this new Encyclical to fraternity and social friendship.

Pope Francis highlights the significance of living a fraternal life with no boundaries, like Saint Francis of Assisi who interacted freely with people of other religions, origin, nationality and colour.

Pope Francis further identifies a number of challenges affect the world today among others; wars and disasters, regression, throw away culture, growing sense of loss of history that leads to A kind of “deconstructionism”, new forms of cultural colonization this is leading to losing not only the spiritual identity but also the moral consistency, intellectual, economic and political independence” not forgetting the plight of the world created by COVID-19 pandemic.

The Encyclical encourages dialogue among nations, between of different faiths, families and communities to promote peace and love.