Politicians should not infringe on the right of independents 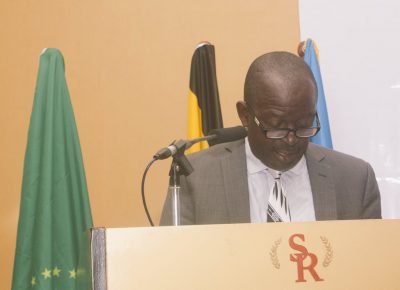 Makerere University Don Dr Simba Sallie Kayunga has urged political parties not to frustrate independent candidates by locking them out of political processes.

Dr observes that independent candidates have played a key role in setting Uganda’s political agenda, under Uganda’s multi-party dispensation. He adds that the existence of a multi-party system does not take away the rights of people to participate in politics.

Dr Simba was delivering a keynote address during a National Dialogue on Political Parties and Constitutionalism organized by the Uganda Human Rights Commission (UHRC) in Kampala today. The dialogue was taking stock of the 15 years of multi-party governance and examining whether political parties have enhanced constitutionalism in Uganda.

His statement comes amid ongoing discussions on electoral reforms which require party members to seek discharge from their parties before contesting as independent candidates. The proposal, according to its proponents, seeks to preserve multi-party democracy in the country and prevent disruption and sabotage of political party strategy and activities.

However, Dr Simba disagrees with the move, saying that it is everyone’s right to participate in elections advising political parties to instead work on these weaknesses to solve the independent phenomena.

The Political Scientist also criticized Opposition Political Parties of always giving an excuse of unleveled political ground in elections advising them to work around the strength and weaknesses of the dominant political party to secure victory.

In his speech, presented by State Minister for Northern Uganda Grace Freedom Kwiyucwiny, Prime Minister Dr Ruhakana Rugunda noted that the government is concerned over the unequal access of marginalized groups such as women, youth, ethnic minorities, persons with disabilities among others to the existing opportunities for fully exercising their civil and political rights.

Previous:
National Prayers an opportunity to examine our operations