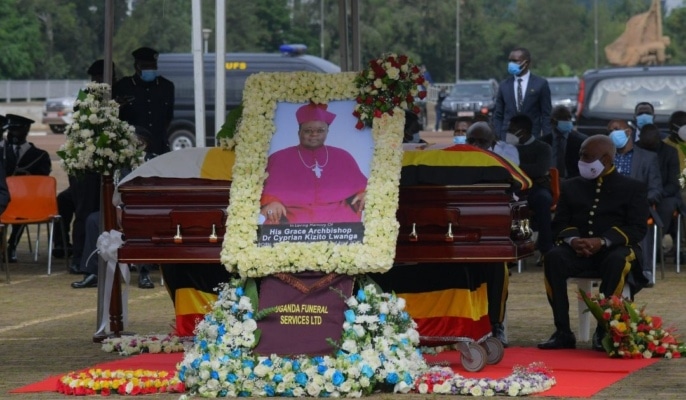 All the 68 Catholic parish churches have been directed to hold special requiem masses for the fallen Archbishop of Kampala, Dr. Cyprian Kizito Lwanga on Thursday at 10am.

Archbishop Lwanga will be laid to rest in the historical Rubaga Cathedral and he will be the third bishop to be buried inside the Saint Mary’s Cathedral before the 10am requiem mass at the burial place.

While delivering his speech at the requiem mass in Namugongo Martyrs Shrine, the Kampala Archdiocese Interim Administrator Msgr. Charles Kasibante said that this has been done to limit crowding at Rubaga Cathedral.

He emphasizes that a few guests will be allowed into Rubaga Cathedral and these will include, Bishops, Religious leaders from the Catholic Church, invited government officials and heads of the faithful from parishes of Kampala.

Msgr. Kasibante however urges the public to continue praying for the late Archbishop for God to grant mercy of welcoming him in His kingdom.