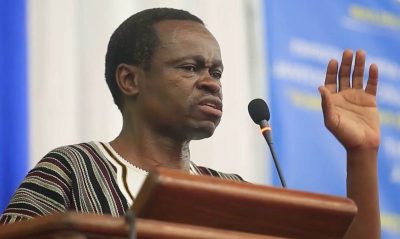 A renowned Pan- Africanist Prof. Patrick Loch Otieno Lumumba has noted that Africa’s political line has failed due to lack of focus by most of the existing Political parties.

Speaking as a guest speaker during the National Symposium on money in Electoral Politics 2019 organized by civil societies at Speak Resort Munyonyo, Lumumba says Africa is experiencing political formations owned by individuals with intention of standing for political position without a national agenda.

Lumumba says commercialization of Politics harms people and the country where leaders who have attained political positions resort to swindling tax payers’ funds to bridge the deficit created during campaigns.

However the Executive director Alliance for Finance Monitoring in Uganda Henry Muguzi said that the problem with people is thinking that politicians are the problem solver which is not the case.