NUP Women demand for the release of their husbands, threaten to demonstrate 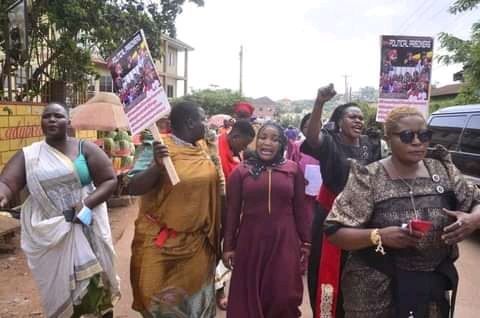 The Opposition National Unity platform (NUP) women have threatened to hold a demonstration if government fails to release their husbands and children in the next few days.

Mary Kisakye, one of  the Women League leaders in NUP told the press at their party headquarters at Kamwokya that it’s high time government release their husbands and children because they were arrested for no reason but rather for supporting this party.

Kisankye says since the arrest of their husbands, the families have broken down, children don’t go to school, families sleep on empty stomachs and women can no longer handle the situation.

She has disclosed that since government has turned a deaf ear about their plight they are going to organize a peaceful demonstration to demand for unconditional release of all political prisoners.

It should be remembered that during after and before 14/January /2021 general elections security forces have been arresting NUP supporters on various charges.

She calls upon all women in the country respective of their political affiliation to join them to demand the release of all political prisoners.

The same Women tried to walk to parliament to deliver their petition to the speaker Rebecca Kadaga but were intercepted at Akacia Mall by the police and told to first seek police clearance.