Njeru Municipality residents in fear over a listed of death 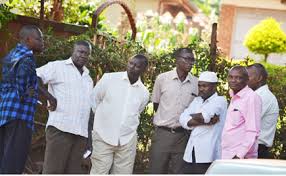 An anonymous letter that was dropped at the home of the chairperson of Kyabaggu zone in Njeru Municipality, has thrown residents into panic.

The letter lists names of five residents, among those targeted are politicians, leaders, and businessmen.

Kyabaggu Zone Defense Secretary Wilson Ntale says that the letter which was found at the chairman’s home on Monday morning is written in Luganda with sentiments that are reportedly threatening residents with attacks.

On the list of targeted people is Umar Mwite, the chairman of the National Resistance Movement-NRM party in Njeru, one Hajji Busuulwa, Hajji Kato, Pastor Zephania Gonahasa, and another resident only known as Godfrey Tebesigwa aka Tebbi.

They gave no reasons for targeting the listed persons.

Ntale suspects that the letter was written by a group known among residents as “Boys-Boys” that has lately become notorious in the area.

He says that the group is threatening the safety of residents and their property.