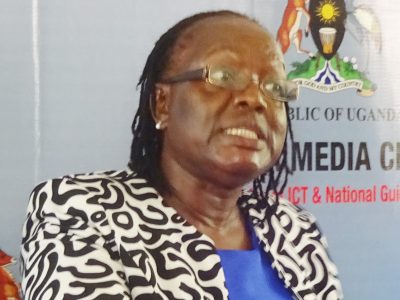 The National Curriculum Development Center (NCDC) has hit back at the Parliamentary Committee on Education saying that the committee has no right to stop the newly introduced curriculum except the cabinet.

Addressing journalists at Media Center in Kampala, the NCDC Executive Director Grace Baguma says that parliament can only support the Ministry of Education in its bid to implement the new curriculum just like it has done by providing 3bnshs for the program.

Last week, Members of Parliament seating on the committee of education and sports raised their concern over the late release of the new curriculum saying that teachers were not given enough time to study and get enough knowledge on the new curriculum.

During a heated debate in parliament that caused for the suspension of the curriculum, the MPs argued that the suspension would allow government to prepare adequately for its countrywide roll out.

However, Baguma says that the process of sensitizing teachers will soon be concluded and by June this year, all schools will be supplied with curriculum books to help teachers understand the curriculum very well.

She further reveals that the Ministry was given 10.3 billion shillings to sensitize and create awareness to the public about the new changes in the curriculum and another batch of 29bnshs to be given to the ministry in three months.

Now, the ministry needs a total of 143bnshs in five years to completely train and create awareness of the new program, according to Baguma.