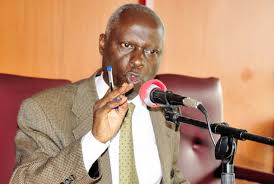 The Uganda People’s Congress (UPC) faction led by Joseph Bbosa has declared a NO hope for the National Dialogue to take place in the country.

Addressing the media in Kampala, Bbosa says that President Yoweri Museveni is using some people from the political parties as representatives of the Interparty Dialogue (IPOD) summit to frustrate and ensure the national dialogue doesn’t happen.

Yesterday, the Inter Religious Council of Uganda (IRCU) postponed the date for the national dialogue from November 12th to December 18th 2018 claiming that they are still receiving ideas from the parties.

The process is expected to see Ugandans develop consensus on pertinent and contentious issues that affect society today with the view of forging a new path that would lead to the country’s sustainable development.

Bbosa emphasizes that the status in which the preparations of the National Dialogue are currently include the funding, topics to be discussed on, and government’s ill position, indicates the death of its existence.

However, Bbosa calls on Ugandans to focus on using the election exercise at all levels to have a government they believe in come 2021.