Muslims Celebrate Eid-ul-Adha with a call to open Mosques. 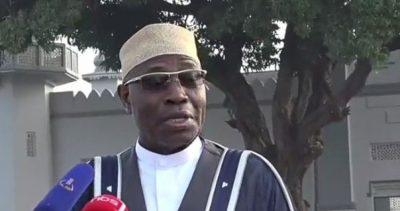 Muslims world over are celebrating Eid-ul-Adha, the Greater Eid through which the faithful commemorate Prophet Ibrahim’s devotion and his readiness to sacrifice his son, Ismail before the sacrifice was replaced with a ram from God.

In his honour, Muslims are expected to slaughter an animal as a sacrifice to mark this occasion.

In his special message from Kibuli the Supreme Mufti Sheikh Siriman Kasule Ndirangwa has appealed to the government to re-open places of worship so that believers can jointly seek divine intervention in the battle against COVID-19.

Prince Kassim Nakibinge who also prayed from his home called on government to treat other diseases with priority because many people are dying. On the issue of politics he said as Muslims they are yet to meet with leaders of political parties’ to present to them their interests.

But the celebration this year has been disrupted by the closure of mosques and a ban on congregations of any kind, due to Coronavirus disease. Ndirangwa says there is no justification for opening all the other public spaces and maintain restrictions on places of worship like mosques when all their leaders are aware of the dangers of Covid-19.

Several countries have implemented physical and social distancing measures aimed at interrupting transmission of COVID-19 by reducing interaction between people, such as the closing of mosques, monitoring of public gatherings and other restrictions on movement and gatherings.

The Luweero District Kadhi has asked the Uganda Police Force and other security agencies to be impartial to all aspiring candidates while enforcing the guidelines on COVID 19.

Last month, the Electoral Commission (EC) announced a ban on open-air campaigns, in the wake of Coronavirus disease.  Political aspirants were asked to utilize virtual platforms to reach their constituents but many of the opposition aspirants have been blocked from holding meetings.

Celebrating Eid-ul-Adha at Kasana mosque in Luweero town, Sheikh Ramadhan Mulindwa Nsanja the Luweero District Kadhi asked the Police not to selectively apply the directives and urged aspirants to pursue campaigns based on the interests of the people rather than promoting disunity and hatred among the voters.

Kadhi Mulindwa also handed over 1,000 heads of cattle donated to County Sheikhs to mark Eid-ul-Adha by Ittifak Federation and Lilah Caring Charity Uganda among others to Muslims in Luweero.