Museveni warns protesters they are starting a game they don’t know. 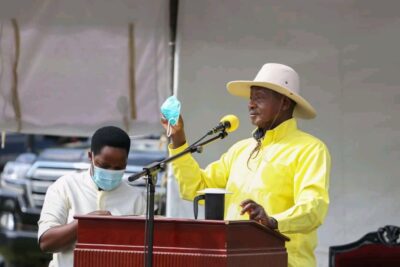 President Museveni has commented on the protests that broke out following the arrest of National Unity Platform presidential aspirant, Robert Kyagulanyi yesterday saying government will not tolerate the hooliganism exhibited by the protesters, warning they will be crashed.

Kyagulanyi was arrest in Luuka while campaigning by police for violating Coronavirus guidelines and detained at Nalufenya police station in Jinja, moments after protests erupted in Kampala and later spread to several parts of the country, especially town centres.

Speaking to NRM leaders in Kotido this afternoon, Museveni said protesters have entered an area of fighting they are conversant with. Whoever started it will regret it. Some of the groups are being used by outsiders who don’t like the stability and independence of Uganda but will discover what they are looking for,”Museveni warned.

Following the protests, several people donning the yellow colours of the ruling NRM party were beaten by protesters as well as security personnel being targeted  which Museveni says very soon it will be very difficult for anyone to Touch NRM members.

The President said that whoever wants to stay safe in the race should follow the guidelines put in place to save the public from Covid-19.