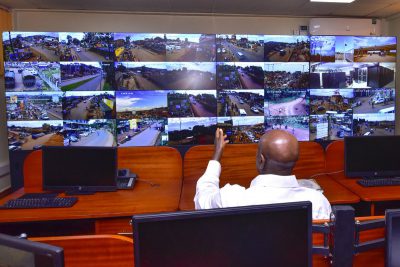 Museveni promised the installation of Closed Circuit Television to deal with increased assassinations following the killing of ASP Andrew Felix Kaweesi in March 2017 a project that has materialized in September 2018 a year after in which period that has claimed among others Arua Municipality MP Ibrahim Abiriga and ASP Mohamed Kirumira.

At the launch, 122 live CCTV cameras have been tested out of the 150 meant to monitor areas of Lungujja, Old Kampala, Rubaga, Kasubi, Kawaala, Kabowa, Natete, Mutundwe and the surrounding areas and Museveni said the cameras will help beef up intelligence of security agencies in fighting crime.

Cabinet approved the borrowing from private banks of Shs400 billion to finance expansion of the CCTV camera project.

In May this year, Parliament passed a Shs60 billion supplementary budget for CCTV cameras for the first phase of installation that is far below the budgeted sum of $124m (Shs470b) by the Police Force for the implementation of the project.

Over 5000 CCTV cameras are to be installed in Kampala and almost the same number in its outskirts.