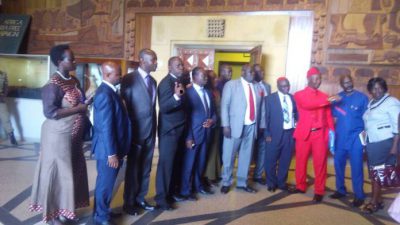 Members of Parliament opposed to the proposal to lift the presidential age limit from the constitution have boycotted parliament sitting today pending an explanation on the September 27 invasion of parliament.

The group consisting mainly of opposition and liberal NRM legislators stormed out of the house when they noticed that the matter was not listed among items on the order paper.

They demand an explanation on a group of plain-clothed security personnel who rafted them up following suspension by the speaker Rebecca Kadaga a fracas that left a number of legislators injured and equipment destroyed.

Up to 25 MPs had been suspended for misconduct and disrupting parliament business a day earlier when they put up a spirited fight to block a motion for a private members bill by Igara West MP Raphael Magyezi who sought to, among others, amend the constitution to remove the cap on the presidential age.

They were suspended for three sittings of Parliament. But parliament went on recess at the time they were expected to return. When business resumed this afternoon, they demanded an explanation on events that led to the invasion.

The Deputy Speaker of Parliament Jacob Oulanyah said that the matter had not yet been discussed by the two speakers forcing the group to abandon the session insisting that they cannot pretend that everything was normal.

Opposition Whip Ibrahim Ssemujju Nganda says that although Parliament is heavily guarded as plenary resumes, the security of individual members is not guaranteed and was optimistic that they will get an explanation in the next sitting of Parliament.

Posted: Wednesday 29th November 2017 06:13:33 AM
Next:
EC USED ALL THE ALLOCATED FUNDS ON THE SUSPENDED LOCAL COUNCIL POLLS.