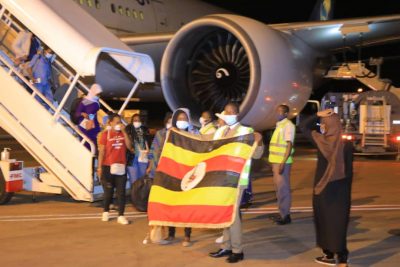 Another group of 107 Ugandans and legal residents have returned home from Europe, after more than four months of being stuck abroad.

The latest group came from The Netherlands, Belgium and Luxembourg, where they got stuck following the closure of borders at the height of the COVID-19 pandemic in March. They arrived at Entebbe International Airport t on Tuesday night aboard KLM Royal Dutch Airlines.

Earlier the group comprising government officials, students, medical doctors and others had been seen off at Amsterdam Airport Schiphol by a delegation led by Ambassador Franklin R. Katungwe, the Deputy Head of Mission at Uganda’s Embassy in Brussels.

At Entebbe, they were received by officials from the Ministry of Foreign Affairs and taken to various centres in Entebbe and Kampala for the mandatory 14-day quarantine.

However, this flight, just like the one from Saudi Arabia that landed earlier in the day, was not on the schedule for repatriating Ugandans overseas. The schedule is to enable the Ministry of Health to decongest quarantine centres for better management of COVID-19 suspects and patients according to Ambassador Patrick Mugoya, the Foreign Affairs Permanent Secretary.

At least 2,643 Ugandans have so far returned home surpassing the figure of 2,400 that government had earlier registered.

Previous:
Lukwago labels Mao an enemy of the liberation struggle.