Ministers and MPs who lost in primaries ready to mobilize for the party. 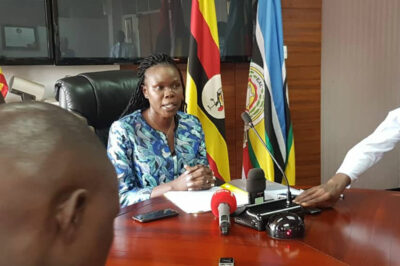 14 members of Parliament who lost in the NRM primaries have joined forces with a mission to convince other members of lost in the party elections losers not to stand as independents or join other parties.

Led by the state minister for investment Evelyn Anite the MPs addressed the press today have vowed not to stand as independents in the general elections with a goal of ensuring unity in the party and are kick starting mobilization for the NRM party flag bearers.

Anite says they are seeking a reorganization of the party in order to iron out irregularities and mismanagement of the party that led to the chaotic NRM primaries that were witnessed at the start of this month, reconcile warring factions in various districts and ensure unity starting with Kigezi region tomorrow.

Key among the issues that they would like to address is the matter of the voters register that led to the confusion that surrounded the primaries leading to massive vote rigging in many areas and counseling those who lost not to think of joining other political parties.

Charles Illukor the Kumi county MP says the NRM party still remains the party to deliver Uganda from the problems it faces, and laughed at the FDC party president Patrick Amuriat who is said to have tried to engage him to leave NRM and joining them saying he cannot come a political traveler.

Previous:
Erias Lukwago back in action for the Kampala Mayoral race.