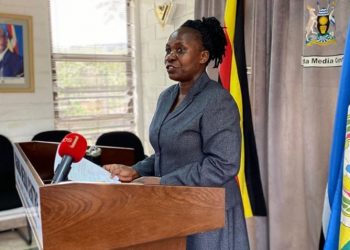 The State Minister for Local Governments Jennifer Namuyangu has advised all local governments to stop over relying on central government support in-order to deliver services to the local.

She made the plea while launching the first ever Local government Economic Development program-LED which is aiming at empowering local governments to partner with investors or private companies to initiate and mobilize resources of income and revenue collections.

The program which is housed under the Ministry of Local government will see local government entering into private and public partnership to invest in income generating projects which in a long term contribute to the job creation, revenue enhancement, improved household and others.

The project is to first be enrolled in Mukono, Mpigi and Makindye-Ssabagabo for a period of a year and later be expanded to other districts under the support of the Commonwealth Local Government Forum and 100,000 euro’s has been injected for the kick start of the program.

It’s from here that Namuyangu appealed to local governments to use this opportunity to identify potential revenue avenues to help in delivering services being that the government can’t fully contribute to the needs of all 137 districts.

Posted: Thursday 15th April 2021 06:48:25 AM
Next:
MP Ssekikubo upset over State’s resurrection of attempted murder charges against him