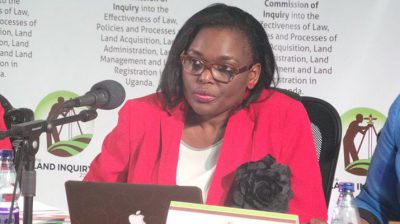 The Minister for Lands, Housing and Urban Development Betty Amongi has for the second time absconded from appearing before the Land probe.

Amongi had been scheduled to interface with the Land commission of Inquiry this Thursday after being served with witness summons last week following her failure to attend the same land probe over controversies surrounding to fraudulent transactions in the Uganda Land Fund that operates under the Uganda Land Commission.

Today, the Commission’s Lead Council Ebert Byenkya informed the Chairperson Justice Catherine Bamugemereire that the Minister couldn’t make it due other Ministerial activities she had travelled too.

This prompted Justice Bamugemereire to state that the commission will issue new summons to Minister Amongi to appear and testify over the alleged shoddy operations of the fund.

Bamugemereire emphasized that Amongi is expected to appear in person.