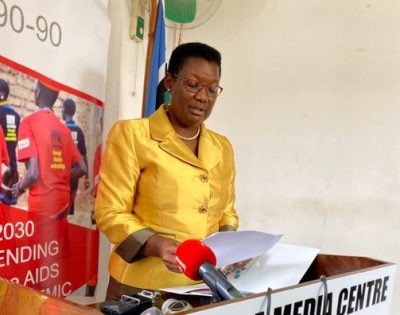 As Uganda joins the rest of the world on December 1st to commemorate the World AIDS Day, Men are advised to embrace free testing for HIV for Uganda to achieve its set targets of ending HIV/AIDS as a public health threat by 2030.

President Yoweri Kaguta Museveni launched “The Presidential Fast-track Initiative on ending HIV&AIDS in Uganda by 2030 ” the first of the kind in Africa and the entire world.

The Minister in Charge of the Presidency, Esther Mbayo says that men are key in spreading the disease but many do not want to test for HIV which has led to its prevalence to keep high among Ugandans especially the young girls.

She has disclosed that despite the progress made so far in reducing new HIV infections, the burden remains very high at about 1,000 new infections per week so she emphasized everyone to test for HIV to know his/her status, in case they are negative then avoid all the risks that may expose you to the virus or if found to be HIV positive then get enrolled on treatment.

The national commemoration of the World AIDS Day on Sunday December 1st will be in Kayunga district under theme “Engaging Young People to champion the end of new HIV infections” and President Museveni, is expected to be the Chief Guest.

Previous:
PAC calls for a list of those who owe government for taking their ranches