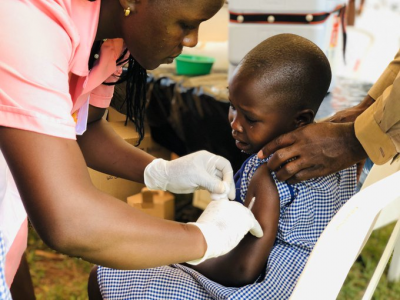 The ministry of Health has extended the national immunization exercise of Polio, Measles and Rubella because some areas missed out on the immunization due to shortage of drugs.

The ministry announced strictly five days from 16th this month to 20th for the exercise but never put in anticipation the weather condition and gaps like shortage of drugs like it has been seen in some of the far to reach areas in the country.

The UPDF had to deliver vaccines to Gulu, Kiruhura, Soroti, Mbarara and Kabale Districts last evening following an emergency request by the Ministry of Health to the force for a quick delivery to arrest shortage were the immunization has continued up to today.

The minister for health Dr. Jane Acheng Ochero, has announced extension of the Mass immunization exercise of In Kampala, Mukono and Wakiso, up to tomorrow October 22, 2019, to cater for the gaps created due to high numbers of the children and cover some of those who had negative attitude that the vaccine would cause problems which is not true according to the health experts.

The week-long mass measles and rubella immunisation exercise was targeting 18 million children although the achieved numbers are not yet made public.

Previous:
Time for PLE is ready- students should study the teachers taught