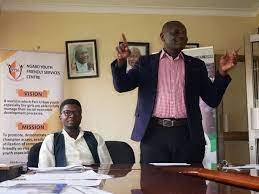 The Makindye Division Urban Council has held its first council sitting amidst a scuffle from security operatives who attempted to stop the meeting that was regarded as a violation of the presidential directive of avoiding crowds that could spread Covid-19.

Chaired by the Speaker Charles Luba Lwanga, the meeting that was slated to start at 10am delayed up to midday where Lwanga in his opening remarks expressed dissatisfaction over the continued suffering of many Ugandans especially those in Bukasa, Makindye and Gaba among other areas due to lack of food caused by the Covid-19 lockdown.

In his address, the Makindye Divison Mayor Hajji Ali Kasirye Nganda Mulyannyama expressed concern over the matter of Mailo land noting that there is no need of amending the land laws to remove the Mailo land tenure system to solve eviction related problems.

Joseph Bbaale Bwanika, who was elected Deputy Mayor, promised to unit all members if they are to serve the people of Makindye effectively.

Previous:
Over 300,000 doses of Sinovac Vaccines to jet in Uganda on Saturday