Lukwago labels Mao an enemy of the liberation struggle. 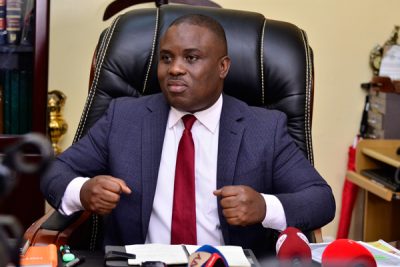 Kampala Lord Mayor, Erias Lukwago now a former member of the opposition Democratic Party has condemned President Norbert Mao for his born of the bad leadership that is forcing many brains out of the historical party in Uganda.

Lukwago who officially joined Forum for Democratic Change yesterday at a special ceremony held at the FDC headquarters in Najjanankumbi says Mao has labeled them as prodigal sons, rebels and garbage that deterred the party development.

In his chronological line Lukwago said the former DP leader Paul Kawanga Ssemogerere emphasized coherence, understanding and dialogue that is why he build a young team in the late 90s to work with reform agenda started by Dr. Kizza Besigye, in the spirit of working to liberate Uganda.

However Mao has spoilt all efforts to the extent of starting to name the 16 DP MPs in parliament in a disgraceful manner Lukwago says, confirming to them that Mao is the enemy to the struggle over the liberation of Uganda.

Mao said now that the MPs considered to be movers and shakers in Uganda’s politics, they should recollect their minds and stabilize than concentrating on demonizing DP and blackmailing its leaders.”