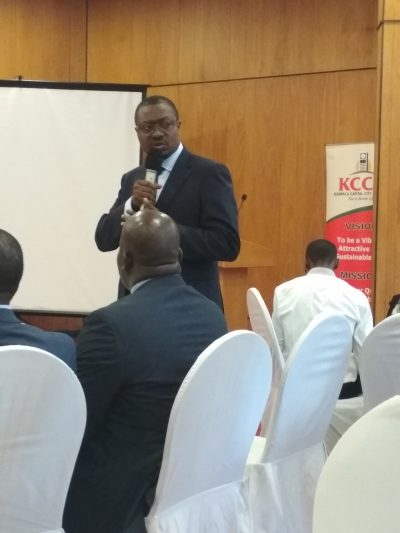 Kampala Capital City Authority KCCA is to launch the second 5 year development plan 2020/25 that will see massive development of the city including the Old and New Tax Parks to accommodate more parking spaces for motorists both private and public.

In a breakfast meeting held this morning in Kampala KCCA Acting Executive Director Andrew Kittaka says they want to design flyovers with the latest on plan is the Clock tower pedestrian area that will see the memorial queen’s clock relocated to freedom square to allow enough space for relocation.

Kittaka agrees that sensitization and supervision is key to change the mindset of Kampala people to respect and effectively use the public property put in place.

He says the sound accountability system that has increased their revenue collections to almost 100 billion shillings a year, centralizing the treasury from 151 bank accounts to One, have all been credited by among others the world bank giving them opportunity to plan for selling of bonds raise more money

Kittaka says they are to conduct an Arial survey mapping around Kampala starting July 15th 2019 to identify space for development and development initiatives undertaken within the city , using a plane flying at low level around Kampala City to take clear pictures.

Previous:
2,000 LDUs to be recruited in Northern Uganda and West Nile