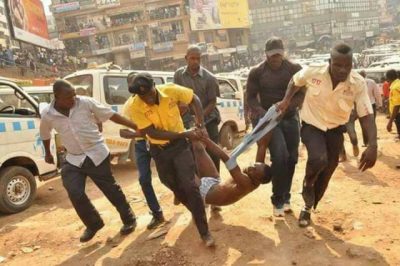 The Kampala Capital City Authority KCCA Lord Councilors have passed a motion to prosecute the law enforcement officers who have been accused of brutality against the street vendors and hawkers.

The motion was brought by Makerere University Lord councilor Doreen Nyanjura in a meeting chaired by the Lord mayor Elias Lukwago at City Hall in Kampala, and has been supported by 19 out of 34 councilors.

At the same council meeting, the lord councilors also resolved to enforce the ordinance bill to establish and legalize the operations of the KCCA law enforcement team.

Councilors have also applauded the Minister for Kampala Betty Kamya for suspending over 5 KCCA law enforcement officers accused of misconduct although the Lord Mayor Lukwago termed it political since she has no mandate to cause the discontinuing of the operations of any KCCA officer.

The whole of last year, several vendors in the city centre cried out to authorities over the manner in which Kampala Capital City Authority law enforcement officers treat them when exercising their duties.