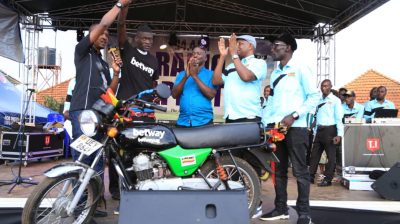 The Annual Radio Sapientia extravaganza dubbed Ekibittu for 2019 that draws fans and revelers to celebrate the end of year for Radio Sapientia were left wondering after Mr. Kawooya Shafick with a sight impairment challenge winning a brand new motorcycle that is given out among a number of activities in Ekibittu.

Ekibittu is a moment of enjoyment comprising of lots of entertainment, crowning of the sports quiz winner “Kakensa”, eats and drinks.

This cooperate social responsibility event crowns Radio Sapientia calendar and embarking on a new plan in her area of broadcasting and evangelizing the peoples as a Catholic founded Radio Station by the Uganda Episcopal Conference.

The Managing Director Radio Sapientia Fr. Eustachius Lwemalika was overwhelmed by the high turn up of both fans and revelers, acknowledging their unwavering support through listening to the Radio and encouraging them not to relent.

He also informed them the Catholic Church was soon starting a Television to further strengthen the mission of evangelization.

In the event Mr. Kawooya Shafick with a sight impairment shocked the crowds when he emerged the winner of the this year’s Radio Sapientia Sports Kakensa

On the Sports Kakensa, a sports quiz held every year, From a total of 200 entrants who started the competition on September 2, 2019 it’s only 5 who managed to rich the finals and Mr. Kawooya Shafick from Entebbe won the competition after scoring 28 points, walking away with a Brand new motorcycle, followed by Lwanga Divine a senor 3 student from Kibiri in Makindye Ssabagabo who scored 24 points and won a freezer and Sserwadda Fabian with 20 points walked away with a Samsung 32 Inch flat screen.

The last two Ssekago Arnold from a student at Makerere University who collected 19 points got a latest smart mobile phone Samsung from link communications while the only woman among them Namakula Annet who got 07 points got 24 Inch flat screen.

The prizes were handed over to them by the Fr. Lwemalika, Betway marketing manager Clive Kyaze Makindye division lord mayor Kasirye Nganda Mulyanyama before a number of other invited guests among them Board members of Radio Sapientia, staff from the Uganda Catholic Secretariat, officials from Centenary Bank and Pax Insurance Company.

The event was sponsored by a number of companies like Centenary Bank, Pax insurance, Tri-pai international and Betway Uganda the usual sponsors of the Sports quiz competition called Kakensa w’emizanyo who contributed a brand new motorcycle, a freezer and Samsung 32 flat screen to the winners.