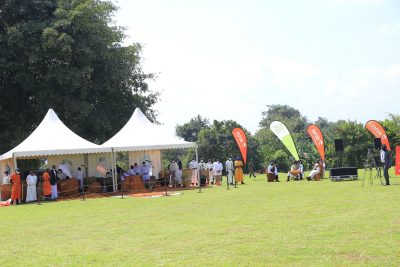 The Kabaka of Buganda Ronald Muwenda Mutebi ll has appealed to security organs not to use force as they implement covid19 guidelines set by President Yoweri Museveni.

He made the remarks on his 27th coronation ceremony at Lubiri Palace Mengo  were he has added his voice to the plight of many Ugandans for the security operatives to act professionally, while executing their duties.

His majesty has appealed to the Youths not to lose hope so quickly like one Hussein walugembe who set himself ablaze at Masaka Police Station after officers demanded a bribe to release his motorcycle.

Kabaka Mutebi has also appealed  to the central government not to neglect others diseases while fighting the deadly pandemic Covid-19.

The vice president of Uganda Edward Kiwanuka Ssekandi has applauded his majesty for his tremendous efforts in the fight against covid19, education and health.

The Katikiro of Buganda Charles peter Mayiga reechoed that Buganda’s silence shouldn’t be taken for granted in the demand for federal government.

The occasion has been driven under the theme; Culture in the fight against Covid 19 and HIV.

The occasion has been graced by only invited guests among them; ministers from Buganda kingdom, central government, members of the royal family among others.

Previous:
Muslims Celebrate Eid-ul-Adha with a call to open Mosques.