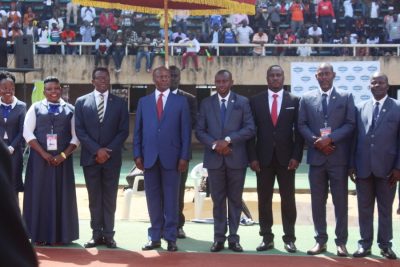 The Kabaka of Buganda Ronald Muwenda Mutebi ll has rallied footballers and other celebrities to use their positions and talents to fight HIV / AIDS scourge especially among the youth in the society.

To emerge victorious, Bulemeezi won Busiro Count by one goal to nil at the Masaza Cup finals in Namboole stadium.

Addressing thousands of his subjects, Kabaka said that it is on record, footballers gain popularity just like any other celebrities.

He wants them to use such positions to spread messages that support the fight against the deadly virus.

He congratulated Bulemeezi upon this milestone & stressed the importance of such sporting activities in the Kingdom especially the unity they breed.

His majesty Mutebi further handed over a Masaza cup dummy trophy to Bulemeezi County and awarded medals to the players as a symbol of victory appreciation for being the 2019 Buganda Masaza Cup champions.

On the same occasion, the Katikiro of Buganda Charles Peter Mayiga urged the subjects in Bulemeezi to protect the land and Buganda heritage as well ensuring that discipline is maintained since the Kingdom targets sports as a method of development.

Kabaka Mutebi arrived at Bamunanika in Bulemeezi County arrived close to half past midday and was received by Mengo’s Premier Charles Peter Mayiga along with other dignitaries.