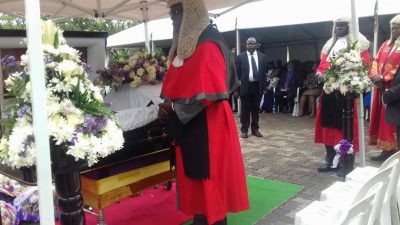 The members of the legal fraternity, the judiciary and various representatives from government have paid tribute to the former Deputy Chief justice Leticia Mukasa Kikonyongo for decades of her excellent service in the judiciary.

At a ceremony held at High Court in Kampala, Chief Justice Bart Katureebe praised the deceased as the “lady who served beyond the expectations, and expressed dismay that she died without receiving her retirement benefits, even though President Yoweri Museveni had ordered so, after finding her confined in a wheel chair at her home.

The deputy Chief Justice Aliphonse Owiny Dollo described the deceased as a firm lady who was able to control her court without shouting at people.

His worship Godfrey Kaweesa the President of the Uganda Judicial Officers Association (UJOA) revealed that the judiciary will always salute the late Kikonyongo for her memorable work in the judiciary especially during 2005 when the Black Mamba had attacked High Court in Kampala.

Justice Esther Kisakye, the chairperson for National Association of Women Judges, which was founded by the deceased in 1993, said Kikonyogo mentored and influenced many female legal officers in Uganda.

Parliament is also to pay her tribute on Thursday November 30, according to the Deputy Speaker of Paliament Jacob Oulanyah.

The body of the late will lie in state at mid day and in the afternoon parliament will eulogize her.

Radio Sapientia also extends condolence message to her family and May her soul rest in Peace.