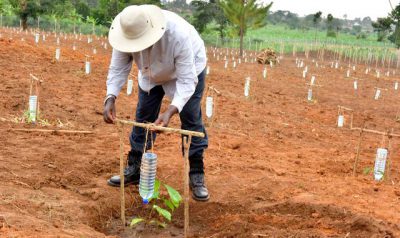 President Yoweri Museveni has listed about 15 irrigation projects government is yet to launch across the country this financial year to improve on the commercial agro production.

Jotting from over 10 page speech at the 56th Independence Day celebrations in Kyotera district this evening, Museveni said the projects will enhance the country’s efforts in agriculture.

Noting form the statistical side for the last financial year, the country had estimated that the economy to grow at 5 % but given improvements in the economy the growth shot to 6.1% but agriculture the backbone remained low especially in rural where commercial agriculture is not yet embraced yet it’s the way to go.

Among the irrigation projects include, Doho Phase II in Butaleja, Mubuku Phase II in Kasese, Nyenge in Kween, Kawumu in Luwero and Nabigaga in Kamuri districts but they are finalizing a fertilizer factory in Tororo under the auspice of the Chinese partners that will be supplement with Nitrogen from Lake Albert and Phosphate from lake Katwe to form NPK needed to improve on soil fertility.

Museveni says detractors of the NRM government now have fear because Uganda is growing from strength to strength with the improvement on public infrastructure promising to work on the main road through Kyotera to Mutukula boarder.