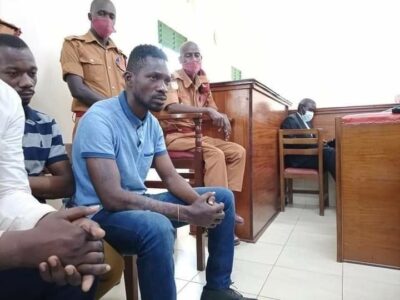 This is after Kyagulanyi, represented by Counsel Medard Lubega Seggona was charged for engaging in an act likely to spread the infection of Covid-19 which prosecution says he committed on November 18th 2020 in Luuka town.

The magistrate who was sitting in for Iganga Chief Magistrate, Jessica Chemeri granted Kyagulanyi a non cash bail of one million shillings and five million shillings for both of his sureties who included Jinja East MP, Paul Mwiru and Manjiya County MP, John Baptist Nambeshe.

Magistrate Agwero has asked Kyagulanyi to report back to Iganga High Court every after two weeks, strictly enforce the Standard Operating Procedures (SOPs) against the spread of Covid-19 during his campaign meetings and also barred him from holding processions to and from his campaign meetings.

Kyagulanyi who’s contesting for the Presidency for the first time was arrested on Wednesday soon after he reached the campaign venue in Luuka district and has since been held at Nalufenya Police station in Jinja district.

His arrest sparked violent protests in Kampala and spread to Masaka, Kityana, Hoima, Mukono and small areas and in the process police and sister security agencies used teargas and live bullets to disperse the protestors and so far 47 people have been confirmed dead by medics although police records show a different figure.

According to records at Mulago Hospital, 37 bodies were brought to the mortuary from different hospitals, while 12 are patients who died at Mulago Referral Hospital on Wednesday and Thursday.

David Niwamanya, the Mulago National Referral Hospital Principal Administrator, says that some of the patients died on arrival at the hospital while others died in the process of being operated to remove the bullets.

Dr Moses Byaruhanga, the police pathologist, said the city mortuary has received 37 bodies which have been claimed by relatives except six which are yet to be claimed. The pathologist says most of the bodies had injuries arising from firearms, stampede and traumatic accidents.

The hospital management is creating space at New Mulago to add 100 beds for the purpose.

Mulago hospital alone has since Wednesday registered 95 riot casualties, a cumulative number of patients who were injured during the riots that erupted as a result of the arrest of Robert Kyagulanyi, the National Unity Platform presidential candidate.

Out of the 95 patients, 74 sustained injuries from gunshots, 21 from tear gas. Twelve have succumbed to the injuries.

Posted: Friday 20th November 2020 06:16:00 PM
Next:
None unionized workers to register for their MP elections.