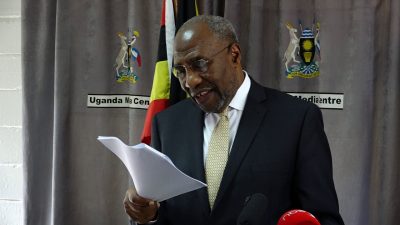 The Prime Minister Dr Ruhakana Rugunda has said the country is “reasonably prepared” to respond to the invasion of the desert locusts.

On Sunday, the government confirmed an invasion of Desert Locusts in parts of Amudat, Nabilatuk and Nakapiripirit, some of the areas in Karamoja sub region that share a common border with Kenya. Upon the announcement, Dr Rugunda urged citizens to work closely with the government in the fight against the desert locusts.

State Minister for Agriculture Aggrey Bagiire says immediately after receiving reports that the locusts had entered the country response teams were dispatched to the three districts to confirm the invasion.

Bagiire added that the Agriculture Ministry has already prepared both manual and automatic pumps that have been dispatched this morning to Karamoja that are to be used in spraying since they have in stock the chemicals needed, however districts have been requested to provide water bowsers because they need a lot of water.

Already, State Minister for Relief and Disaster Preparedness Musa Francis Ecweru and Minister for animal industry Bright Rwamirama are already in Nairobi to negotiate for aircraft to support in aerial spraying of the locusts.

Desert Locust Control Organisation is a regional organization for integrated pest and vector management that ensures food security in Eastern Africa Region. Uganda is among the nine countries that form the body that including; Kenya, Tanzania, Ethiopia, Sudan, South Sudan, Eritrea, Somalia, and Djibouti.

Government has listed three chemicals to use in the spray against the desert locusts. They include Fenitrothion 96 per cent low volume formulation, which is a phosphorothioate insecticide.

Others are Malathion which is an organophosphate insecticide. This is commonly used to control mosquitoes and a variety of insects that attack fruits, vegetables, landscaping plants, and shrubs as well as Pyrethroid insecticides.

At least 2,000 soldiers of the Uganda People’s Defense Forces (UPDF) and officers have been undergoing training from Aswa – Lolim.