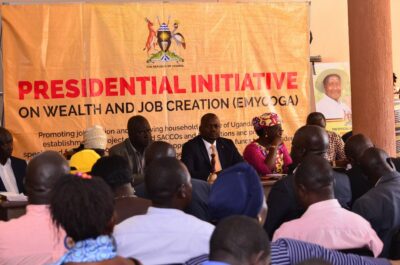 The minister of state for microfinance Haruna Kasolo has appealed to leaders in Kampala to avoid politicking government programs.

He revealed this in the sensitization workshop for lord councilors at the launch of Emyooga program in Kampala district at Kampala capital city authority noting that many government programs have failed because of leaders who politicize every program.

He thus appealed to leaders to put aside their political differences such that they educate their people to embrace the saving culture as away to fight poverty among themselves.

The word “emyooga ” is a kinyankole word meaning a group of people who come together for a common goal.

This program is a presidential initiative on wealth aimed at promoting job creation and improving household income of 68% Ugandans.

This program will benefit 18 categories of sacco’s which among others  include bodaboda Sacco’s ,journalists Sacco,salon operators sacco, youth leaders Sacco’s and performing artists sacco. Each sacco will get 30 million shs which will be borrowed amongst the members purposely to build income amongst people.