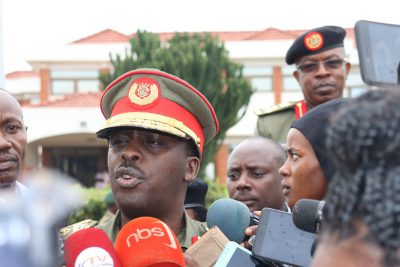 The Chief of Defense Forces Gen. David Muhoozi has defended the UPDF deployment in and outside parliament during the climax of the age limit debate.

Soldiers suspected to be from the Special Forces Command which is part of the UPDF were seen in parliament roughing up legislators especially from the opposition as chaos erupted on the floor of the August House during the peak of the age limit debate.

The Court in Mbale would later summon Gen. Muhoozi for cross examination by lawyers over the role played by the army.

On Tuesday, the CDF told court in Mbale that he was called by then Inspector General of Police, Gen.Kale Kayihura seeking for back up from the army to restore order in parliament.

Gen.Muhoozi said in response to questions from lawyers led by Erias Lukwago and Ladislaus Rwakafuuzi.

When asked why the army beat up and injured Members of Parliament during the ensuing scuffle, the CDF said he was not aware of any legislator tortured by the military.

Asked on the kind of support that the police wanted from the army and the kind of situation that the law and enforcement officers could not handle, he said it was a tactical manner.

Human rights lawyer Rwakafuuzi quizzed Gen.Muhoozi on the reason behind the army deployment at the August House even before being invited but he admitted that ordinarily there are soldiers stationed at parliament.

The lawyers cornered Muhoozi accusing the army of violating the rules of procedure by stopping Members of Parliament from doing their job but he insisted UPDF’s presence was to restore the August House’s integrity.

Earlier, the secretary to the cabinet John Mitala and Keith Muhakanizi, the Permanent Secretary for the Finance Ministry were also quizzed by lawyers during the age limit petition hearings by the Constitutional Court in Mbale.