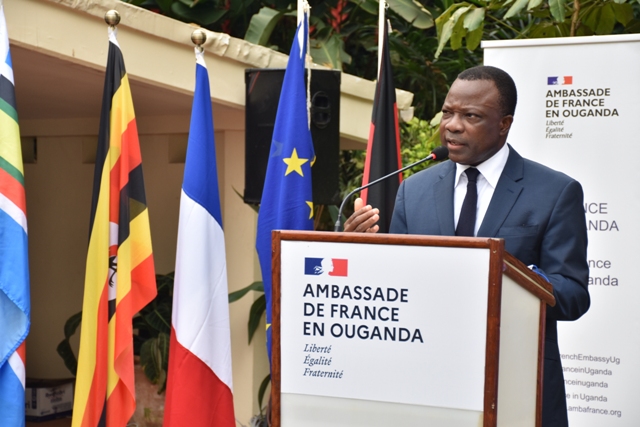 The French Ambassador to Uganda Jules-Armand Aniam-Bossou has asked development partners to skill refugees on agricultural practices to address challenges of food insecurity and climate change.

Aniam-Bossou says imparting innovative agricultural skills to refugees will go a long way in ensuring that they are able to provide food for themselves other than relying on being given food every day.

He made the remarks while in Isingiro Town during his visit to Nakivale Refugee Settlement to inspect food security and livelihood projects supported by the French Government.

The 1.2 billion Shillings food aid project is being implemented by Action Against Hunger (ACF) in both Nakivale and Kyangwali refugees Settlements in Isingiro and Kikube Districts respectively.

According to Aniam-bossou, innovation should be part of every partner’s support to refugees that will see them become more independent after gaining skills.

1,000 households have benefited from the French government-funded project aimed at improving the nutrition, food security, and self-reliance of refugees in South Western Uganda.

Nakivale Refugee settlement is home to some 145,613 refugees’ the majority of whom are from the Democratic Republic of Congo (DRC).

Posted: Thursday 4th August 2022 09:56:27 AM
Next:
CSO demands for amendments in Employment Act on breast feeding