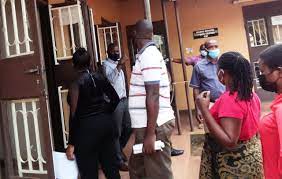 The CID Spokesperson Charles Twine has named the suspects as Margret Nansereko from Gonda farm supplies, Monica Nansanga from Kagado enterprise and Moses Senfuma and Anna Balinda from Mercy Uganda Agro-inputs all working in container village in Kampala.

These were rounded off in an operation conducted on Wednesday by three bodies against selling counterfeit and sub standard Agro-chemical products in Kampala.

Fred Muwema, the Director Legal and Corporate Affairs at ACN said that they will write to the Agriculture Ministry so that the companies whose workers were arrested in connection to selling counterfeit Agro chemical products, are blacklisted from the market.

He emphasizes that suspects shall be charged with different offences of counterfeiting products and selling goods with fake trademarks and such offences carry punishments of three years and above.

Posted: Friday 30th July 2021 09:07:09 AM
Next:
Commissioning of Karuma Hydropower dam is for next year- Minister Nakabirwa

Previous:
16year old girl dies in boyfriend’s home as he is away for work