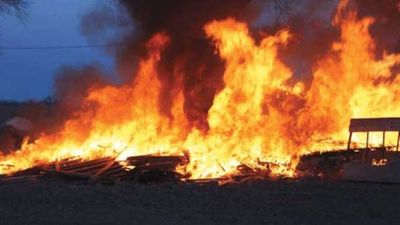 The fire is said to have started from the Senior Three boys’ dormitory at around 5:30 am on Tuesday morning as the students were away for morning preps destroying mattresses, books and personal items of the students.

Isah Ssemwogerere, the Savannah Regional Police Spokesperson, says that the teachers and students managed to put out the fire before alerting the Police.

He noted that officers from the Fire Response Unit at Luweero Central Police and Wobulenzi Police station rushed to the scene to investigate the possible cause of the fire.

Julius Namansa, the Head teacher of Katikamu SDA S.S says that the school will replace the learners’ property to enable them to continue learning since the damage wasn’t much.

It wasn’t clear how many students were affected by the fire.  However, some sources in the school say the dormitory hosts over 100 students.

Both Police and School authorities are yet to establish the cause of the fire.  However, a teacher told us on condition of anonymity that the fire incident comes only a few days after some of his colleagues vowed to strike over pay and forced leave as the school handles post-COVID 19 losses.

On Monday, the school administrators met teachers in a move to avert the strike.

In 2018, fire gutted another boys’ dormitory at the same school destroying students’ property worth millions of Shillings and injured critically one student. Investigations into the fire pointed to a short circuit resulting from poor wiring and substandard electric cables.

Previous:
Pope Francis declares May a month of prayer against Covid-19.