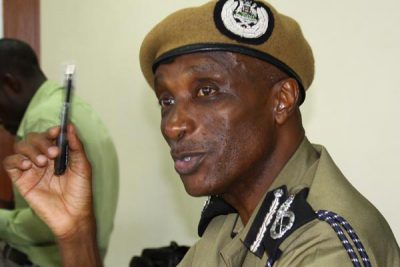 The opposition Forum for Democratic change (FDC) has demanded the Inspector General of police (IGP) General Kale Kayihura to resign and be investigated over his relationship with the boda boda group of 2010.

In his speech while at parliament last week Kayihura confirmed that Boda Boda 2010 is a registered group and legally assisting them to secure the country from the opposition protestors.

The FDC Spokesperson Ibrahim Ssemujju Nganda, in a Monday press conference at their party headquarters in Najjanakumbi says the wave of criminality evident in the country must be explained by the IGP and his unauthorized groups.

Ssemujju adds that he is ready to take the matter to the floor of parliament once it resumes on 30th this month.

Already about 28 suspects in connection to the killing of Case Hospital accountant, Francis Ekulagar are confirmed to be in security custody as spot on arrests and investigations continue jointly taken by the CMI, ISO and the Police.

Meanwhile during todays Buganda Lukiiko at Bulange Mengo, the Katikkiro of Buganda Charles Peter Mayiga revealed that police has been weakened to appoint that it now requires the army to deal with criminality.