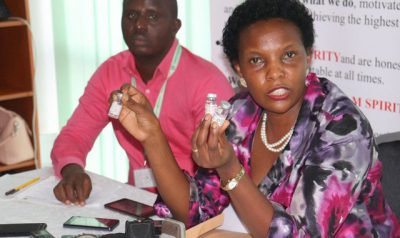 The National Drug Authority (NDA) has confirmed to have impounded counterfeit medicines and Vaccines for Hepatitis B treatment.

According to the Authority Director for Products and Safety Hellen Ndagije , the hepatitis B drugs were discovered from Eight private hospitals and clinics yet the Vaccines were picked from immunization camps.

Whereas the counterfeit hepatitis B Vaccine was picked from immunisation camps at Mbale Central Market managed by scrupulous personnel and others at Mbarara University camp by Sanyu Medical Centre and at Katabi in Entebbe.

The suspects were all arrested and are with the police for investigations.

However, Ndagije appeals to all private clinics in possession of the 10ml multi-dose Hepatits B vaccine vials manufactured by Seruma Institute of India to immediately stop using them and take them to the nearest National Drug Authority offices.