Erias Lukwago back in action for the Kampala Mayoral race. 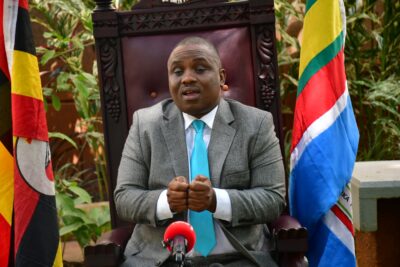 The Lord Mayor of Kampala  Erias Lukwago vows to continue fighting for rule of law,  human rights violation, evictions of urban poor ,bad governance among others in Kampala and Uganda at large  when re-elected into power come 2021 general elections.

Lukwago has revealed this while launching his campaigns at his home wakaliga saying that he has been at fore front in making sure people of Kampala live at peace mostly the business community.

Lukwago adds that being the Lord Mayor for Kampala is a sacrifice for the persons who have been cheated of their rightful service that has to be demanded by a brave person like him.

Lukwago is vying for his third (3) Lord mayoral term of office and has appealed to voters in Kampala to trust him again in the coming elections.

Other aspirants for the same seat include artiste Daniel Kazibwe a.k.a Ragga Dee (NRM), artiste Joseph Mayanja aka Jose Chameleon and Kawempe North MP Latif Sebaggala who are waiting to secure the National Unity Platform ticket at least one of them plus a number of other independents including the former FDC candidate Nabbira Ssempala.

Posted: Wednesday 16th September 2020 06:53:49 PM
Next:
Ministers and MPs who lost in primaries ready to mobilize for the party.