EC will use scientific campaigning so long as COVID-19 still exists. 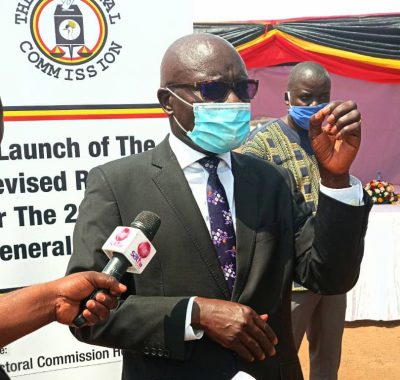 The Electoral Commission says any government official be it the RDC or any security officer who is planning to obstruct any candidate from accessing a media house for campaigns , to stand warned, he or she will be held liable under the law for sabotaging government programs.

Justice Simon Byabakama the Chairman EC admits to have heard incidents where political players have been over time drugged out of Radio Stations and stopped from getting hosted for programs and even transmitters switched off all under claims of orders from above.

However following the pronouncement of a scientific campaigning process on June 16th under the revised roadmap, Justice Byabakama says from June 22nd to 26th June 2020, they have been engaging stake holders over the process which he insists is under law, first under the constitution article 61, the presidential and parliamentary elections Act.

On the judgment passed by justice Lydia Mugambe giving any Ugandan in the diapra and inmates of 18 years to vote is still under study but he contends that its applicability at such a short notice might be hard to be operationalised.

Byabakama however says the public should not be misinformed that all activities of the elections will be scientific, nominations, voting, counting of votes will be done in a conventional or traditional way but strictly observing the SOPs set by health experts to control the spread of COVID-19 so long as it’s still existent.

Elections for the special needs people are to be held in August, followed by nominations for local government leaders in around August 7th 2020, Members of Parliament will be nominated between October 12th and 13th and the Presidential on November 2nd and 3rd 2020 while elections will be conducted in January or February but this will be clarified after nominations in October.

Previous:
Gulu will not be opened to transport, ministry of health.