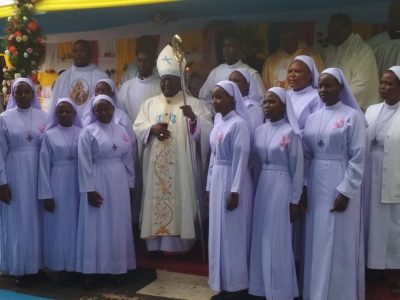 The Archbishop of Kampala Dr. Cyprian Kizito Lwanga has emphasized observance of the religious and priestly vows because it is out of free will.

Leading the annual celebration of the Institute of the Good Samaritan Sisters of Nalukolongo day, where Reverend Sisters profess their first and perpetual vows while others celebrate Jubilee years of service in religious life.

Dr. Lwanga congratulated the institute under the leadership of Rev. Sr. John Evangelist Mugisha the mother general and her council for the guidance that has seen them receiving six newly professed sisters who took their vows in a closed session at Nalukolongo on Friday December 6, 2019, four Sisters have taken their perpetual vows and  five other sisters who include; Sr. Specioza Nakabugo, Sr. Emily Namatovu, Sr. Agricola Byarimpa, Sr. Florence Katusabe and Sr. Gorret Nakanjako have celebrated 25 years of service.

He said their contribution to caring for the vulnerable as their charism was going beyond providing human touch to the minds of many in Uganda, that has given credit to the Catholic Church.

Dr. Lwanga however said this is not possible if a religious person or a priest abandons prayer, celebration of sacraments that renew one’s life on top of observing the religious vows; chastity, obedience and poverty.

The Good Samaritan institute was founded by the late Emmanuel Cardinal Nsubuga in 1978 to care for the elderly and the most vulnerable who have no caretaker and today’s celebration has been under the theme; “I will be with you as I was with Moses; Joshua 1:5”.

Dr. Lwanga has also congratulated the White Fathers who are celebrating 150 years since they arrived in Africa for evangelisation saying their contribution in Uganda has helped it grow spiritually to the extent of getting martyrs who draw over a million people from all over the world for the June 3rd Uganda martyrs day. He said Rome has allowed him to revive the Uganda martyrs guild devotion and a movement aimed at promoting the Uganda martyrs on top of a special museum that is to be called Muteesa I at Lubaga Cathedral aimed at promoting religious historical that were used by the missionaries written materials and items used in their life.

The function has been attended by the Vicar general of Kampala Msgr. Charles Kasibante, the senior secretary who also signed the documents to Rome that allowed the Good Samaritan institute in Uganda Msgr. Charles Kimbowa, Priests and religious from other religious institutes.