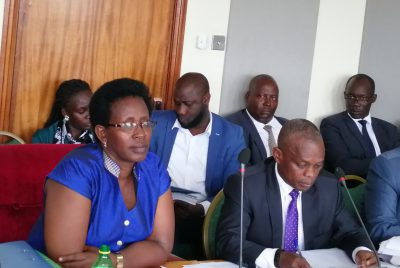 The permanent secretary ministry of Health Dr. Diana Atwine together with her undersecretary Ronald Ssegawa have been forced to record statements with the office of the CID at parliament over diversion of over 2 billion shillings, part of which was meant for construction of Pediatric surgery rooms in regional referral hospitals.

This was discovered as the committee engaged the ministry of health to scrutinize the Auditor general’s report for the financial year 2017/18.

The committee members faulted Dr. Atwine for going against the Public Finance management Act that requires, seeking permission from the permanent secretary to the treasury before any allocated monies can be diverted for any other use.

The 2.2bn shillings was diverted to cater for rehabilitation and expansion of Kayunga hospital a project that had not been catered for by government in the budget allocation for the financial year 2017/18.

The under secretary Ronald Ssegawa admitted to the mistake prompting the Aruu South MP Odonga Otto to move a motion that he should be handled over to the CID for further investigations over the matter.

The Kalungu West MP Joseph Gonzaga Ssewungu wondered how Dr. Atwine who was at fore front of monitoring health issues while still in the office of the president could just let such mistakes go on as the permanent secretary of the ministry of health calling for her interrogation by the CID.

A tune of 4.8bn Shs had been earmarked for the construction of the pediatric surgery rooms in regional referrals but according to the auditor general’s report, the funds could not be utilized owing to lack of verified payment certificates from some contractors.