Dr. Besigye’s fumes over the extension of his Mbarara case to September 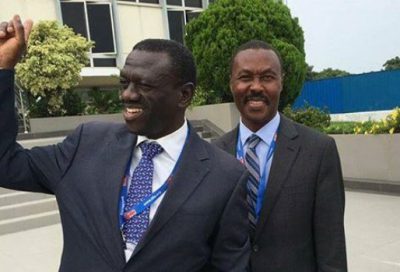 Mbarara Grade One Magistrates Court has adjourned the case in which the former Forum for Democratic Change-FDC party president Dr.Kiiza Besigye is accused of inciting violence along with Ingrid Turinawe and Besigye’s driver Kato after prosecution failed to present the witnesses.

The accused appeared before Mbarara Grade One Magistrate Sanyu Mukasa on charges of assaulting police officers and inciting the public against police during the FDC Party Presidential campaigns last year.

Lawyers to the accused persons Lydia Ahim-bisibwe and Elias Lukwago prayed for a verdict on the case. However, they were over ruled by the magistrate who adjourned the case to September 19th.

However, the Mbarara Resident State Attorney Caroline Keshuubi revealed that the witnesses will be in court during the next court appearance.

Shortly after the court session Dr. Besigye told journalists that next month will be his last time to appear in court because such delays are tactical to frustrate Justice.