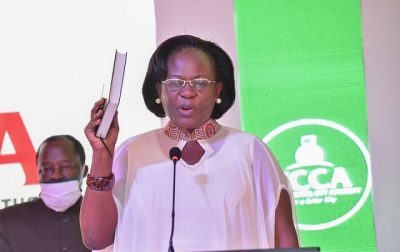 The cabinet secretary and head of public service Uganda Dr John Mitala has appealed to the newly appointed executive director Kampala capital city authority (KCCA) Dorothy Kisaka, to always collaborate with political wing of the city as a tool for effective service delivery.

Eng. Kitaka applauded president Museveni for appointing him as interim ED of KCCA following the resignation of Jennifer Ssemakula Musisi in 2018 having served for 7 years a period rift with the lord mayor Erias Lukwago.

Kitaka says despite various challenges among others; inadequate funding they have managed to improve the image of Kampala which the incoming ED Ms. Kisaka promised to promote and protect in line with the constitution.

When it came to the Lord Mayor Al Haji Ssalongo Erias Lukwago he expressed disappointment, that since he become the lord mayor of the city, there has never been effective service delivery that has deprived Kampala economic development.

Meanwhile the minister for Kampala Betty Among also promised to give support to where necessary to transform the city.