COURT TO DECIDE SHEIKH KAMOGA’S BAIL APPLICATION ON MAY 18TH 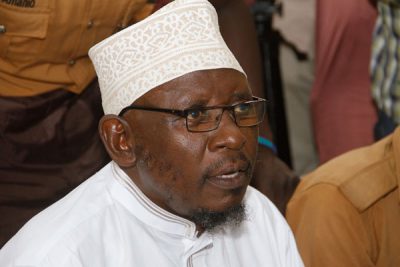 Court of Appeal Justice Christopher Madrama has set May 18th 2018 as the day to give a ruling on the bail application filed by jailed Tabliq leader, Sheikh Yunus Kamoga.

This morning, Justice Madrama started hearing submissions from both the state and Kamoga’s lawyers in a case in which he petitioned the Court of Appeal to release him on bail.

During the hearing, Kamoga presented seven sureties, including former Makindye West MP Hussein Kyanjo, Imam Idi Kasozi, lecturer at Islamic University in Uganda (IUIU) Kampala-campus and Sheikh Suleiman Kakeeto citing advanced age and ill-health as some of the grounds for his release on bail.

However, state lawyers led by Lillian Omara objected to the application saying it should be dismissed on several grounds that he was convicted of a grave offence of terrorism and sentenced to life imprisonment last year.

The defense lawyer Robert Kamoga urged Sheikh Kamoga’s relatives to stay calm as they continue to pursue justice for their loved one.