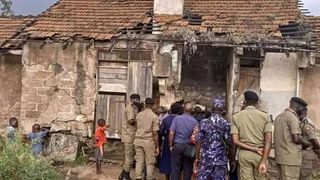 The hearing of a case where one lawyer Steven Kalali petitioned the High Court in Kampala over the sorry housing structures in police facilities has flopped due to the absence of the trial judge.

His lordship Douglas Singiza was to kick off with the hearing of the case today but because of being indisposed the matter couldn’t kick off and it has been adjourned to the 12th January 2023.

In his application filed before the High Court Civil Division in April this year, Kalali wants the High court to order the government to immediately provide decent housing for all police personnel in Uganda.

His petition came a month after a group of legislators had visited Jinja Police Barracks where they were greeted with dilapidated structures built-in 1934. In addition to the sorry state of the houses, Jinja Police barracks is home to about 1,662 people as opposed to the planned population of 249 people.

Kalali argues that since the promulgation of the 1995 Constitution, police officers have continued staying in deplorable structures unfit for human habitation.

He backed his petition with photos of dilapidated housing units in Mbale, Jinja and Nsambya Police Barracks and the Auditor General Reports for 2012, 2016 and 2020, which pointed to the sorry state of the police barracks and have been ignored.