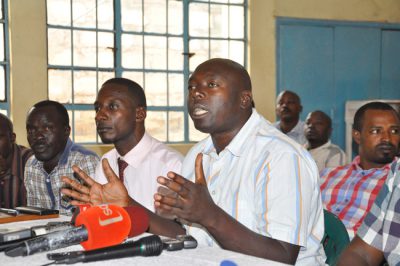 Traders under the Kampala metropolitan informal sector business forum have threatened to sue government if it fails to deal with violent political activities in the city center.

In a joint statement signed by the chairman of the informal sector Hajji Yasin Ssematimba the group says they are often affected by demonstrations in terms of loss of trade, business disruptions and sometimes theft and damage to their property something they can no longer tolerate.

In a meeting where they handed over a statement to the minister for Kampala Betty Olive Namisango Kamya at Nakivubo Blue Primary School, the secretary general of the forum Adam Kakuba said that they live in fear as the country draws to the political temperatures where many politicians are preparing for the 2021 elections.

They says various campaigns that have been launched such as ’’Twerwaneko ‘’launched by the former presidential candidate for FDC Dr. Kizza Besigye is just one of those they fear to cause destabilization in the city.

Traders also want government to gazette areas where protests can be carried out by politicians and other people so that their businesses are not affected since it’s the role of the government   to ensure that the enjoyment of one’s right should not affect the other side of the business area.

In reply the minister for Kampala Betty Olive Namisango Kamya assured them that their concern will be taken to the relevant authorities.