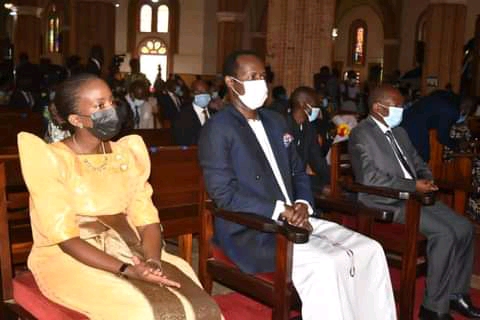 By; Gedion Peter Ssebulime
April 04, 2021
Special invited guests and a few Christians have graced the holy Eucharistic celebrations today at Lubaga Cathedral for the celebration of Easter Sunday at the same time praying for the Kabaka of Buganda Ronald Muwenda Mutebi for making 66 years of age.
In the mass led by The Vicar General Msgr. Charles Kasibante, he first extended condolences to the Christians from the Catholic Church, Cardinal Emmanuel Wamala and the entire Kampala Archdiocese for the loss of His Grace Dr. Cyprian Kizito Lwanga the Archbishop of Kampala.
Msgr. Kasibante congratulated Kabaka for clocking 66 years of age and prayed to God to grant him wisdom, life and support to continue guiding the Kingdom.
He thanked the congregation for the fulfillment of the three pillars of lent, prayer, fasting and arms giving.
Msgr. Kasibante said the suffering, death and resurrection of Jesus Christ is a true story of the Christian and Catholic faith as told by Saint Peter and if we believe so everyone ought to live an exemplary life and demanded by God in the community.
He read the Easter Message Dr. Cyprian Kizito Lwanga had prepared for this mass and he called on Christians to always reflect on the diocesan theme; Fratelli Tutti let us deepen our faith hope and love by being good witnesses of Jesus Christ. It explains everything that will put families, society and the country in love, hope and peace.
Dr. Lwanga called on government to advance lasting solutions for the youth who are still in abductions, suffering and tortured, mysterious killings like in Nankulanye where a boda boda man Joshua Musasizi killed three ladies and killings in Northern Uganda all leave wounds and trauma to the families and all Ugandans, this is not the attribute of brother hood as put in Fratelli Tutti.
Today the 8 appointed Papal Knights and Dens who were supposed to be crowned but due to the demise of the Archbishop Dr. Cyprian Kizito Lwanga, the function has been deferred. But further hastened to say that among the papal knights there is a couple Mr. and Mrs. Joseph Iga who were appointed to show the true meaning of a family to co-create in God’s will.
The mass has been attended by Politicians among others; the principal of NUP Robert Kyagulanyi, State Minister for Higher Education J.C. Muyingo and Prince David Wasajja.
Dr. Cyprian Lwanga was born on 19 January 1953 at Kyabakadde Village, in Naggalama Parish, Mukono District, Lugazi Diocese.
He attended Kyabakadde Primary School. He entered Nyenga Seminary in 1964. Between 1972 and 1974, he studied at Katigondo National Major Seminary, before he joined Ggaba National Seminary, in Kampala for his Theology. In 1979, he joined the University of Clermont-Ferrand in France, were he studied administration and languages, with particular emphasis on administration. Later, he studied at Pontifical University of the Holy Cross in Rome, where in 1994, he earned a doctorate in Canon Law.
He was ordained a priest on 8 April 1978 at Rubaga Cathedral by Cardinal Emmanuel Kiwanuka Nsubuga. He served as a priest of Kampala Archdiocese until 30 November 1996.
He was appointed first bishop of the Diocese of Kasana-Luweero on 30 November 1996 and consecrated bishop on 1 March 1997 at Kasana-Luweero, by Cardinal Emmanuel Wamala, Archbishop of Kampala, assisted by Bishop Joseph Bernard Louis Willigers, Bishop of Jinja and Bishop Paul Lokiru Kalanda, Bishop of Fort Portal.
On 19 August 2006, he was appointed the third Archbishop of the Archdiocese of Kampala and was installed on 30 September 2006 at Rubaga Cathedral, succeeding Cardinal Emmanuel Wamala, who resigned.
Dr. Lwanga has been an out spoken shepherd who always wanted government to act responsibly. He has also been on record for demanding professional work from the security agencies and state informers as well as the media which two organs he has accused of misinformation and character-assassination.