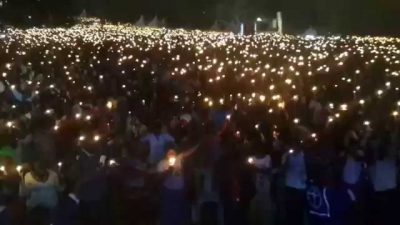 Thousands of Christians flocked worship places and churches to join in thanks giving prayers as they ushered in the New Year 2019.

All the known places for mass gatherings within the Catholic Church like Kiwamirembe, Bukalango, Nsambya and the Martyrs Shrine Namungongo all saw mammoth crowds of believers who celebrated the end and New Year.

His grace the archbishop of Kampala Dr Cyprian Kizito Lwanga while at YES Center Nsambya, tipped Ugandans to work hard in the year 2019, to get what to eat.

He said the prayer out Father explains it all for what a Christian would be and do; work hard, respect God, love and respect one another and forgive because everyone is a sinner.

At the Martyrs Shrine Namugongo where the Kampala Archdiocesan Charismatic Renewal organised the end of year prayers, Fr. Anthony Musaala noted praised the lord for having helped him realize his mistakes that caused himself excommunication for five years from the Catholic Church.

He urged the congregation to always seek God’s voice for guidance and support for the life on earth and eternal.

Meanwhile Rev. Fr. Santos Mugisa from Hoima diocese decried of the suffering Ugandans are subjected to by their fellow citizens due to greed, power and money.

Fr. Mugisa noted that land grabbing and evictions, corruption and torture discredit Uganda a country of the Uganda martyrs adding that Ugandans need to experience God for them to respect humanity.

He called for selfless service by those in leadership to Ugandans.