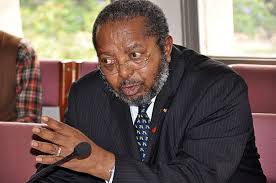 Former Minister of Finance, Planning and Economic Development from the 90’s up to 2002, late Joash Mayanja Nkangi has been faulted in the illegal closure of Teefe Trust bank in 1993.

This has been unearthed during an interface between Members of Parliament serving on the Parliamentary Committee on Commissions, Statutory Authorities and State Enterprises (COSASE) and Bank of Uganda (BoU) officials to find who illegally sanctioned the closure of Teefe Bank.

Upon his response on to the matter, the Central Bank Governor Emmanuel Tumusiime Mutebire put the blame to the late Manyanja Nkangi saying that BoU acted on the letter from the minister directing them to close the bank.

When asked by Odonga Otto, one of the committee members on whether he would reconsider opening the closed banks, Mutebire said neither Teefe nor any other closed banks will be re-opened.

In the same meeting Chaired by Abdul Katuntu, BoU officials were directed to provide evidences of original land tittles that were liquated from Teefe bank as additional information to the inventory report and loan and deposit schedules that were submitted to the committee yesterday for scrutiny.