Artistes and comedians should stand with parliament for a fair law. 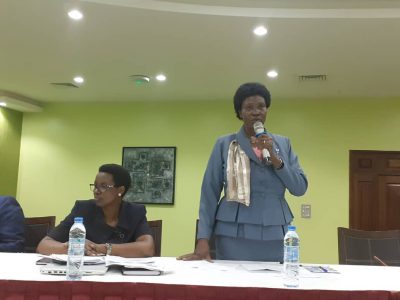 The workers Members of Parliament have advised creative, performing artistes and allied workers to petition parliament on the proposed government regulations on the industry.

The regulations require these people to first submit their composed songs, poems, films among others to regulatory bodies for verification and approval before releasing/playing them officially to the public.

the regulations need to be reviewed before they are implemented because they are likely to destroy the creative and music industry yet it is of the great sources of revenue and development in the country.

Margret Rwabusaijja says if the artistes run to court instead of parliament, they will have tied their hands and MPs will have no option to defend them.

Meanwhile Anita Sseruwagi, general secretary National Union of creative, performing artistes and allied workers says what annoys them is the lack of consultation of stakeholders by UCC and their colleagues as if they own the talent.

This comes after the comedy group called Bizonto comedy group and an artiste Gerald Kiwewa, have just left police cells where they spent four days having been arrested for their products said to be insinuating tribal differences.

Previous:
Boda Bodas will be out of Kampala by November 1st 2020.