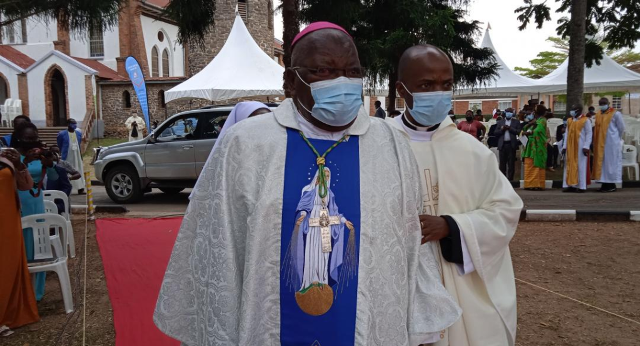 The ceremony to bid farewell to Emeritus Paul Bakyenga was delayed by two years due to the outbreak of Covid-19.

The Most Rev Lambert Bainomugisha the Archbishop of Mbarara Archdiocese commended Bakyenga as a passionate priest who preached the word of God with zeal.

In his farewell Speech, Bakyenga 78, said he never thought at any one time he would be a Bishop because he had specialized in scripture studies than canon law but it by the grace of God that he has served the Catholic Church to date.

Archbishop Bakyenga was born in 1944 in Bumbaire Igara Bushenyi district ordained a priest in 1971 at the age of 27 at Mushanga Parish in Bushenyi district and immediately posted as the Chaplain of Ntare School in Mbarara. He was later moved to Nyamitanga Parish as the Curate, He also served as a Rector at Kitabi Seminary, and as a Pastoral Coordinator at Nyamitanga Cathedral.

Emeritus Bakyenga was given 100 Million Shillings as a retirement package by the Christians.